Sauerbruch: "Music is a jealous lover"!

See also the phantastic article about:
Doctor-Musicians:
Juggling a Commitment to Medicine and a Passion for Music

This is a huge field!

It is said often that doctors are musical. But an astonishing number of double talents are as well professional doctors as musicians and have done a full musical diploma.

Some prominent examples are the OrganDoc Albert Schweitzer, then the doctor, musician, composer and minister Alexander Borodin from Moskau, the conductors and doctors Giuseppe Sinopoli and Zubin Metha.

All music doctors carry "two souls in their breast" cannot easily decide for one of their talents during the studies. Medicine is a jealous lover said Sauerbruch and also music wants everything.....
Often the intensive music making gets practically lost after the medical degree and they need only a little push to re-activate the hidden talents!

In many big cities there are doctors orchestras, also all over the world: like "Barcelona doctors orchestra" (Orquestra Ars Medica) und das PCOT (Physicians Chamber Orchestra of Taiwan). You can see a dentist in a film! See also Orchestra Medicus Japan!

Dr. Pöller studied conducting for 5 years at the Richard-Strauß-Konservatorium in Munich, founded an amateur orchestra in 1969 which he conducted for 20 years. With the first recital 18th February 1989 he founded the german doctors orchestra: For several week-end-work-phases doctors come around from all over germany and perform the freshly studied program.
A climax was the performance of the 9th symphony of Beethoven in Stade (near Hamburg) with the Symphonic Choir Hamburg. The 10-year-jubilee-concert was in Munich/Gasteig-center at 28 November 1999. 23rd January 1999 there was another concert there with prize winners of a music doctors competition: Excellent double professionalists gave several solo concertos.

Many doctors give whole solo programs. Dr.medl Wolfgang Stadler from bad Windsheim, former guest student of Nurnberg conservcatory plays on his Cello being accompanied by a lady pianist, the wife of a medical colleague. He remarks that medicin is an art like music, and with both you can make "Kunstfehler" (mistakes).

Of course there are also Jazz musicians and bands from entertainment music up to rock bands. The orthopedic doctor Dr.med. Peter Wehling always plays with his colleague Dr.med. Jens Hartmann as a Jazz piano duo at congresses of the Orthopedic Association.

Dr.med. Rassweiler has a unique Urologist Pop band which has edited several CDs. Also the Orthopedical singing quartett around Prof.Dr.med. Neumann from the University of Magdeburg gives recitals with humoristic own arrangements with medical themes and naturally some of the Comedian Harmonists and have produced a CD.

Dr.med. Walter Krick, doctor for internal medicine from Ludwigshafen should have become baritone according to his singing teacher. After years of decision-battles he decided for medicine. He would do this again looking back, although he has done TV-performances and produced several CDs and sold them thousandwise.

Another solution came out for the Oboist Dr.med. Andreas Schneider from Hamburg: 50/50 as freelance doctor and as freelance musician!

With a piano diploma and the medical degree in his pocket Wolfgang Ellenberger got also the "concert exam" with Prof. Conrad Hansen, later decided for music and is travelling with his Bösendorfer Imperial concert grand (290 cm, 630 kg) as a hand luggage around Europe. Since 1991 he gives piano master classes (up to now over 30 week-ends) which are mostly visited by medical doctors. One participant has the record with 10 classes visited! It is the general practitioner Dr.med. Peter Schnepp from Freiensteinau for whom the few days of the master class is like relax holiday from the stress in the country office with more than 100 patiens a day and non-stop presence around the clock.

In his workshops Ellenberger teaches his "Relativity formula of piano playing" with most modern equipment like computer piano ailent systems for practising all around the clock and there were also live-recitals in the Internet.

As a contact media he offers a world-wide musician doctors register (now around 400 contacts) and there shall be an always actual calendar of music doctors recitals online on this homepage. The link-list will show also interesting links. Ask for being inserted in this lists. The intention of Ellenberger is to offer a central international contact service for music and arts doctors and for all free time hobbies of doctors!

The pharmaceutic industry is doing something but not what they should really do....
Grünenthal is organizing an interesting piano competition for doctors and pharmacists, having edited two CDs. Others sometime publish a CD with some recordings of doctors, but not very professionally done.

The modern possibilities let you experience a different, a creative aspect of the "half-gods in white": Just ask for a
CD of musician doctors when you have to wait in a doctors office for background music.....

See the phantastic article about:

Doctor-Musicians:
Juggling a Commitment to Medicine and a Passion for Music

One example of a multi-talent MusicDoc: Dr. Annamaria Habermann from Milano/Italy 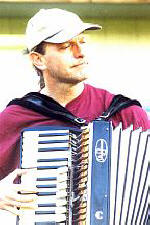 I'm flattered that you would want to do a presentation about me and my musical career. I don't have any current recordings, but the group that I play with the most recently did a live recording which we are going to release in the Spring once we get it mixed down and edited.

I could tell you a little more about myself. I don't do a solo thing at all. I greatly admire people such as yourself who can sit down all by yourself and play wonderful music solo. I prefer to play with other people.....Either backing up a singer or playing with another instrumentalist or playing in a larger group. I like all styles of music.
In various settings I play country, rock, zydeco/cajun, swing, bluegrass, reggae, jazz, etc. I've done some classical, but again, only really in a group setting.

So I don't know if that would make a very good presentation for your project. Why don't we wait until our recording is done and go from there?
[Wolfgang: We will be pleased to present it in a later newsletter!]

A little more about my transition to playing music for a living. I was a Doctor of Optometry for 21 years. My father had done that. I was in practice with him for 10 years, then on my own for another 11 years. I always played music on the side when I was practicing Optometry.

I had taken piano lessons for a while as a child and played different instruments in the school band. I joined my first little rock'n'roll band at age 14.

I quit practicing Optometry in 1998. It was a good career. I enjoyed helping people with their various eye and vision problems. And I had a family to support. At that point I was single. My kids were on their own. I didn't have any debts. And my living expenses were very low. I live in a little 12-sided house, which is paid for, in the woods. I didn't have any kind of retirement fund or pension, but I decided to do what I really wanted to do. I said to myself, "If not now, when?" I didn't want to look back years later and regret that I had not followed my heart and done what I really wanted to do.

So, it's been good. I'm able to support myself between playing music and helping my friend, Kate, with her business. That job is very low-key and relaxed. I get to travel, meet a lot of wonderful people, and play with some great musicians. No regrets......

Please send us your contributions about your extra-medical profession or hobby!

share your experiences with the community and send it to Wolfgang[AT]Ellenberger.name
please with photos etc. as attachment! Or fill out this simple hobby-form.